Statue of Stephen the Great

The monument is dedicated to Stephen the Great, ruler of Moldova between 1457 and 1504. During his 47-year rule, he waged 36 battles (34 of which were victories) with neighbouring states, but also with the Ottoman Empire for safeguarding the frontiers of the state he was ruling. He also founded numerous churches and monasteries, which is one of the reasons why he was canonized by the Romanian Orthodox Church.

The monument is located in Kishnev, in the Ștefan cel Mare park, at the intersection of one of its main alleys with the boulevards Ștefan cel Mare și Sfânt and Grigore Vieru.

On the pedestal plaques there are the following inscriptions: Stephen the Great and the Saint; (Defender of Bessarabia: Nistru, Chilia, Cetatea-Albă; Conqueror of peoples: at Lipnic, at Baia, at Vaslui, at Valea Albă, at Cătlăbuga, at Scheia, at Dumbrava Roşie; Ruler from the mountain to the Dniester river and the sea; founder of monasteries; bringer of justice; his image in his memory.

The statue represents Stephen the Great standing, wearing sovereign garments and the sovereign crown on his head. He is holding a long sword in his right hand and the Holy Cross in his left hand, while the left hand is kept up, so as to show that the ruler had put the cross before the sword. The statue is made of bronze coming from six cannons captured from the Ottomans during the Romanian War of Independence (1877-1878), having a height of 5.20 meters. The pedestal on which the statue is placed is made of Cosăuţi stone and it is decorated with a rope moulded girdle, while the coat of arms of Moldova from the time of Stephen the Great was placed to the front.

The endeavours to build a statue of Stephen the Great in Kishnev started in 1924, a few years after Bessarabia had become a province of Great Romania, by the Union Act of 1918. The project of building the statue was undertaken by sculptor Alexandru Plămădeală from Kishnev, who managed to attain the actual rendering of the statue after studying several portraits of the ruler. The pedestal on which the statue was placed is made based on E.A. Bernardazzi's blueprints, the architect of the city of Kishnev. The monument was completed in the spring of 1928, for the celebration of 10th anniversary of the Union of Bessarabia and Romania, being unveiled on April 29 of the same year.

In June 1940, when Bessarabia was occupied by Soviet troops, the statue was unmounted and taken to Vaslui, in Romania, whereas the pedestal of the statue was demolished. After re-joining Romania in the summer of 1942, the statue was taken back to Kishnev in 1942 and placed close to the initial location. In 1944, before the Soviet army entered Kishnev again, the monument was taken down and sent to Romania, this time to Craiova. In 1945, the monument was discovered in Craiova by the Soviet occupation authorities and taken back to Kishnev. This time, it was placed deep inside the public garden of Kishnev. In the 1950s, the statue was close to being discarded, as the Soviet authorities considered it a symbol of Romanian nationalism. In 1972, the statue was moved again, even deeper in the park and placed on a modest concrete pedestal. The statue was taken back to its original location from the 1920s – a location chosen by sculptor Alexandru Plămădeală himself – only in 1989, being placed on a pedestal constructed in the shape of the initial version. The monument was unveiled, yet again, on 31 August 1990.

Currently, the monument of Stephen the Great is a place for public gatherings, celebration and commemoration ceremonies (such as Republic of Moldova Independence Day). Also, given that the statue of Stephen the Great is located in the centre of the city and given its symbolic value, it represents one of the main tourist attractions of the Moldovan capital city. 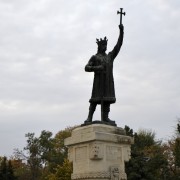 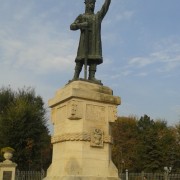