The statue of Anton Durcovici is situated in the inner courtyard of the Our Lady Queen Roman Catholic Cathedral (Catedrala Sfânta Fecioară Maria Regină) in Iași, immediately next to the Assumption of Mary Roman Catholic Church (Biserica Adormirea Maicii Domnului), also known as the Old Cathedral. The Orthodox Metropolitan Church, the Metropolis of Moldavia and Bucovina as well as the Saint Paraskeva Pilgrimage Centre are also in the vicinity.

The bust of Anton Durcovici stands 1.7 m high on top of a marble socle, is carved in wood and weighs about 200 kg.

The statue was made by sculptor Jozsef Demeter from Iași. The unveiling of the statue on 17 May 2015, one year after the beatification of martyr bishop Anton Durcovici, was marked by the celebration of a pontifical mass, which was held in the Our Lady Queen Roman Catholic Cathedral and was followed by a procession on the streets of the city.

The statue of Anton Durcovici has meanwhile turned into a pilgrimage site for Roman Catholic churchgoers in Romania and especially in Moldova.

The statue is visited yearly by hundreds of Catholic churchgoers, who often include it in their tour of the city of Iași. At least twice a year, on May 17 and December 10, celebrations are held to commemorate the anniversary of the birth and death of the martyr bishop, who perished in the prison in Sighet in 1951. 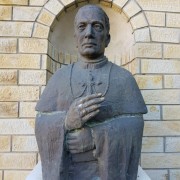 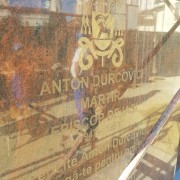