Monument of the deportees to Bărăgan

The monument is located in the middle of Justice Park (Parcul Justiției) in Timișoara, close to the Capitol cinema, where the Philharmonic of Banat and the Hydrotechnical Engineering College carry out their activity.

In memory of deportees to Bărăgan

The monument represents a metal cross (welded metallic structure) framed by a three-legged arch whose arms which meet above, with illuminating elements. The cross is placed on a 1.5 meter plinth made of travertine. The monument is 10 meters tall.

The monument was blessed on the Pentecost in 1996 by His Eminence Nicolae Corneanu, Metropolitan of Banat, on the 45 year commemoration of deportations from Banat. The initiative to build this monument came from The Association of Former Deportees to Bărăgan (president Silviu Sarafolean) and the project was carried out by architect Sorin Gavra. The ceremony was attended by tens of former political detainees from all around the country, along with local authorities.

The monument still keeps alive in collective memory the tragedy of the 12,791 families, or 40,320 people from 258 settlements around the counties of Timiș, Caraș-Severin and Mehedinți, who were taken from their homes and forced on a two-week trip on 17 and 18 June 1951, on the Pentecost, to Bărăgan. The people targeted were Romanians, Germans, Serbians, and Bulgarians, refugees from Bessarabia and Northern Bucovina, as well as Aromanians. After 1956 they could return to their villages, where they found their houses devastated and everything else destroyed. According to official records 1,700 people including 174 children died and only a few have known burial grounds.

Place of commemoration of the victims of deportation to Bărăgan, victims of the Communist regime. There are annual religious ceremonies attended by members of the Association of Former Deportees to Bărăgan, as well as deportees from all over the country, especially the county of Timiş, priests, local and county officials. The commemoration ceremony is followed by a wreath ceremony to keep alive the memory of those who suffered. 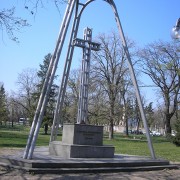 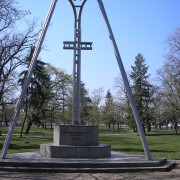