Danka Košanová was 15 years old when she was shot during the Invasion of the Warsaw Pact Armies from 21st to 22nd August 1968. She was killed at the Šafárikovo Square in the centre of Bratislava.

A commemorative plaque is placed on the facade of the Comenius University at the Šafárikovo Square in the city centre of Bratislava.

IN THE CROSSFIRE OF SOVIET OCCUPANTS

A modest plaque on the facade of the building of the Faculty of Law and Philosophy of the Comenius University commemorates tragic events of the Invasion in August 1968.

In 1968 reformist movement in Czechoslovakia proposed changes in socialism to give people more freedom, known as the Prague Spring, and gained immense support of the people. However, not in the Soviet government and bureau in Moscow. The Warsaw Pact Armies invaded Czechoslovakia in August 1968 to crush a short-lived experiment in Communist liberalization, which aroused huge resistance of the people. The result of the invasion were several murdered civilians. The commemorative tablet on the University building at the Šafárikovo Square is dedicated to a young girl, Danka Košanová. On the university staircase traditionally used as a venue for family pictures after the graduation ceremony, Danka was shot by a bullet in the afternoon 22nd August 1968 and died after the transit to the hospital.

The first tablet was unveiled shortly after the tragic events. Its author was academic sculptor Tibor Bártfay. On the very same day and place the iconic picture of Ladislav Bielik was taken here - The Man with Bared Chest in Front of the Occupying Tank. The photographer soon became inconvenient to the normalization regime and lost his job. He died in 1984. However, the photograph was published in numerous worldwide media, magazines, lesson and history books as well as awarded many times.

The post-occupation regime called the Normalization soon decided on the displacement of the commemoration of the tragic events of the Invasion. It was not even allowed to talk about the victims. Only after the fall of communism and due to the efforts of Tibor Bártfay, Zora Täuberová, Juraj Täuber and Juraja Knapek two new tablets for the victims of the Invasion were created and unveiled on 10th March 1990. In 2008 one more tablet was made with two more names of the victims - Stanislav Sivák and naval captain Ján Holík shot to his head.

This tablet is a dignified commemoration of tragic death during the Invasion in 1968. Danka Košanová became a symbol of all innocent victims of crimes committed by the occupation forces. At the anniversary of the occupation flowers and candles are laid here with the Comenius University dignitaries and the members of the Confederation of Political Prisoners being present. For the Slovak people the name of Danka Košanová and the photo of The Man with Bared Chest in Front of the Occupying Tank are definitely of the most notorious and powerful witnesses of the events happening during the Invasion as well as the general feeling of pride, despair, disappointment and resignation leading to the Normalization.

The complete list of the victims of the Invasion: www.21august1968.sk/sk/obete/ 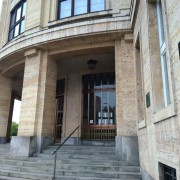 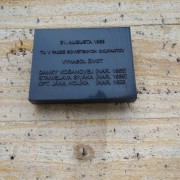 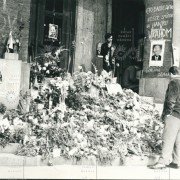 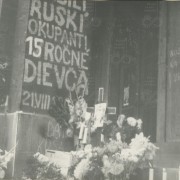