Cyril a Methodius, the patrons saints of Europe.

In the center of the town of Nitra, at the square of John Paul II,  by the entrance gate to the Nitra castle.

The largest sculpture of Thesalonica brothers shows the Saints in long  monastic habit with ancient features. Saint Cyril lifts his right hand in blessing gesture and holds a thick book with a relief of Christ in his left hand. Methodius holds a pixide - a Roman jewellery box. The sculpture is made of epoxide.

This majestic bronze sculpture of Saint Cyril and Methodius was unveiled in 1990 and created by the academic sculptor Ludmila Cvengrosova who often depicts themes from the history of Great Moravia. At that time the statue evoked controversy about certain depicted historic details and artistic interpretation.

Cyril and Methodius were popular topic of the Stur generation in the Slovak National Revival. The saints are often a subject to political propaganda and manipulation of strong nationalistic parties and conservative fractions in the Church despite the fact that they were very progressive and open-minded not only in their times. In Slovakia there is more than 80 churches consecrated to Cyril and Methodius, two public universities with their name in Trnava and Nitra, a hospital in Bratislava, and many other institutions. They inspired numerous works of art spread in towns and villages all around the country. Their national holiday is on July 5th.

Brothers Cyril and Methodius were Byzantine intellectuals who remarkably influenced history of Great Moravia and culture of eastern Slavic nations. Cyril acquired excellent theological, philosophical and linguistic education and Methodius possesed knowledge of law. They were widely travelled and experienced in missionary expedition to the Khazars. The Central Europe in 960’s witnessed a contest of power of the East Frankish empire (Roman Pope) and the Byzantine empire (Constantinople Patrirach). The Frankish monks imposed the power of the Franks over Great Moravia. Great Moravian Duke Rastislav made enormous effort to emancipate from the Frankish power therefore he asked the Pope its own Church organization. The Pope did not approve, therefore Rastislav asked in Constantinople. Byzantine emperor and patriarch in the same person send Cyril and Methodius for the mission to Great Moravia. The scholars were ahead of their time with the idea of translating the Bible to the native language of the local people for better understanding. They founded an academy, educated local scholars, created an original alphabet Glagolics for the Old Church Slavonic language and translated religious and legal texts as well as wrote original literary works. For a short time theay managed to use Old Church Glagolic in liturgy. Their independence did not suit the Franks therefore they were expelled from Great Moravia and continued in their work in Balkan area among other Slavic nations. Their Glagolic alphabet evolved to Cyrillic and later to Azbuka which is still used in Russia, Balkan and some Asian countries. Missionary work of Saint Cyril and Methodius influenced the culture of most countries in Eastern Europe – are revered as Saints, have their own national holiday, statues and ceremonies. Their progressive idea of using vernacular in liturgy was successful only in the Reformation in 16th C. In 1980 the Pope John Paul II revered the Saints as the Patrons of Europe. 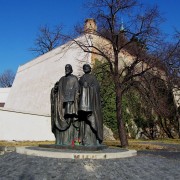