Alexander Dubček, a Slovak politician and statesman, a leading personality of the Prague Spring 1968.

A bust on the pylon in front of the building of the Slovak National Council.

On 20th August 2002 a bronze bust of Alexander Dubcek, the leader of the Prague spring, was unveiled on the square named after him. The unveiling ceremony was at the anniversary of the Invasion to Czechoslovakia by the Warsaw Pact armies and ten years after Dubcek’s tragic death. The ceremonial act of the unveiling was attended by the President Rudolf Schuster, the first Slovak President Michal Kovac with his wife and then Prime Minister Mikulas Dzurinda. The bust was created by the academic sculptor Ludmila Cvengrosova.

Alexander Dubcek is respected in many parts of Europe. His first bust was unveiled in Bologna in 1993 – a year after his tragic death and later on in Strassbourg, Brussels, Rome and even little Czech town Humpolec near by which Dubcek had the fatal car accident.

Alexander Dubček was born in 1921. When he was a four, he left Czechoslovakia with his parents who went to help the Soviet Union within Interhelpa programme. The family returned to Czechoslovakia in 1938. Dubcek during the World War II became a member of then illegal Communist Party and actively fought in the Slovak National Uprising. After the war ended, his career in the Communist Party rose quickly. In the 60s Dubcek became the face of the Prague Spring – a reformist movement within the Communict Party as well as the whole country. He became  world famous and widely popular in his country. During the Cold War Czechoslovakia belonged to the Soviet sphere of influence. The Prague Spring ideas to reform the politics and economy were not approved by the USSR, therefore massive invasion of the Warsaw Pact armies to Czechoslovakia followed. It was the most extensive military operation since the end of the World War II. The top Czechoslovak politicians were  kidnapped to Moscow, forced to change their opinions and political views, and shortly after were suspended and replaced by a new politicians satisfying Moscow demands. Occupation armies settled in Czechoslovakia until 1991 and had enormous impact on politics and life in the country. Shortly after a new political representation seized power, Dubček was offered the diplomatic post in Istanbul and later expelled from the Communist Party and downgraded to a worker and controlled by the Secret Police. Again he became active and popular politician in November 1989 and became the leader of the Social Democrats. He died unexpectedly in a car accident in November 1992. On 22nd August 2008 the Act about the merits of Alexander Dubcek was presented in the Parliament which proposed a bust of Dubcek and a commemorative tablet in the Parliament building. „The first secretary of the Central Committee of the Communist Party of Czechoslovakia in 1968, Alexander Dubcek, significantly contributed to democracy, human rights and the freedom of Slovak nation.“ The legislators eventually decided to place the bust not in the entrance hall of the parliament building but add it to the commemorative tablet already existing in front of the building. The ideas of Alexander Dubcek exceeded the borders of Czechoslovakia, that may be the reason for his name to be famous even today. 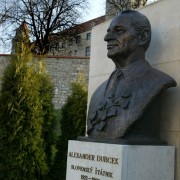