In the urban park between the train station Košice and the city center – the old town Košice.

HERO OF THE SLOVAK

A bronze bust on the pylons made of granite.

Kukorelli’s bust was unveiled in 1958 and designed by academic sculptor A. Račko and Ing. arch L. Greč. In 1976 the memorial was renovated.

Kukorelli is a hero of the two movies made in the 1970s. Many streets, places and a park in the capital bear his name. In the Kukorelli Park in Bratislava one of the last living partisans who remembers liberation of the Eastern Slovakia and knew Kukorelli in person, Anna Bergerová, unveiled his commemorative tablet in September 2018.

Ludovit Kukorelli was one of the most important organizers of the partisan movement in Slovakia during World War II. He was born in 1914 in Orava, his family soon moved to Kosice, were he graduated at grammar school.  He finished his military service as a lieutenant and got recruited to the Czechoslovak Army to become a pilot. After the break up of Czechoslovakia he became a deputy of the regimental commandant of the 3rd airforce regiment and got involved in the  resistance movement groups Flora and Justice which sent information to Czechoslovak exile government in London. In March 1940 Kukorelli refused to be awarded for the offensive to Poland and was degraded by the Minister of War. The lieutenants organized a mass fly off from Piestany to Jugoslavia, but the plan was halted by the attack of Wehrmacht to Jugoslavia in April 1941. Kukorelli was then arrested and imprisoned for 9 months, downgraded and expelled from the army. After being amnested he continued in the resistance as a travel agent with typewriters all around Slovakia and networked. He was watched by the Secret Police. Each time he was arrested by the Police or gestapo he managed to escape. The fourth time he refused to get recruited to the eastern frontline, he went to hiding in Orava and organized illegal partisan groups with woodsmen, refugees from concentration camps and persecuted people. In November 1944 he led his partisan group Čapajev of 1500 people, the largest group in Eastern Slovakia, from the Nazi siege when he died in unexplained  circumstances 150m from the Red Army trenches.

Košice celebrations by the sculpture 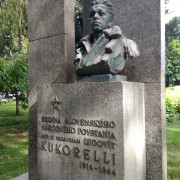 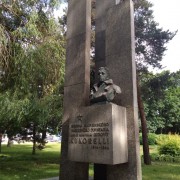 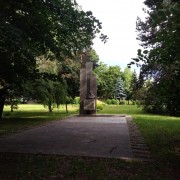 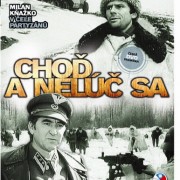