Memorial to the Victims of Holocaust

The victims of Holocaust.

In the middle of the Bratislava Old Town square where the Neolog Synaogue used to be before 1969.

The memorial is a non-figurative sculpture symbolizing an abandoned house with the David’s star on the top. The base is made of black granite with a scripture in Hebrew 'zachor' and in Slovak 'pamätaj' which means 'remember'. Two relief tablets symbolize the door and gravestones at the same time. On the plates coming and leaving shades appear symbolizing those who did not return and the ones who managed to return to life. The Holocaust memorial copies the groundplan of demolished Neolog synagogue and its silhouette is depicted on the wall of memories.

The memorial designed by sculptor Milan Lukáč and architects Peter and Lucia Žalman symbolizes forced deportations of the Jews to concentration camps, abandoned homes and demolishion of the Jewish quarter in Bratislava. An abandoned house is a reminder of the demolished synaogue which used to serve at this place and also perished Jewish quarter.

Many people stop by the Holocaust Memorial. It is a popular stop for the tourists. Many people place stones on the memorial according to the Jewish tradition. Day of the Victims of Holocaust and of Racial Violence on 9th September is dedicated to the people persecuted in the Slovak Fascist state: the Jewish and Roma people. On this date a commemoration ceremony takes place every year with laying wreaths, politicians giving speeches, attendance of ambassadors, Jewish and Roma organizations, members of different churches, and general public. Well-known people read the names of the victims in public. The message of the Holocaust victims is not to let violence, hatred or prejudice harm relations between the majority and Jewish, Roma, homosexual or any other minorities.

The Jews used to live in Bratislava since the Middle Ages and several times they were cast out the town. In 1335 the Cistercian order requested the Estergom Archbishop to demolish a synagogue. Bratislava became the Jewish center of European importance in 19th Century due to Rabbi Chatam Sofer and his jeshiva. Three synagoues used to be in Bratislava. The Orthodox Synaogue on Zámocká Street was blown up by Nazis during the World War II and the ruins were cleaned up by the communists. The Neolog synagoue built in Moorish style on the Rybné Square in 1893 was demolished in 1969 during the construction of the New Bridge connecting a new residential area on the right bank of Danube with the Old Town. Part of Jewish Street and Rybné Square were demolished. Nowadays, only one synagogue remains. It is an Orthodox synagogue built in 1923 on Heydukova ulica. Most of Bratislava Jews perished in the Holocaust and even the survivors were not welcome after war, often they found new inhabitants in their homes and decided to emmgirate to Palestine. The Jewish community in Bratislava nowadays is just fragments of what used to be here. 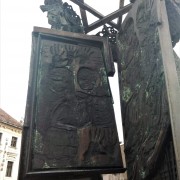 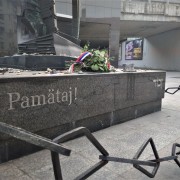 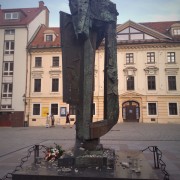 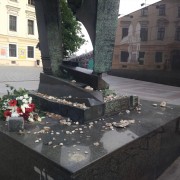