In a wider city center of Trnava in front of the synagoue Status quo ante well visible from the street.

Cenotaph made of black granite with three pillars above – inspired by free masonry symbology.

The work of Slovak-Jewish architect Artur Szalatnai-Slatinský (1891 – 1961), born as Schlessinger, who designed also a synagogue in Bratislava, spa houses and villas all around Slovakia. The memorial was built in 1947 in front of a former synagogue status quo ante. It is a rare example of holocaust monumental architecture.  The official ideology glorified the role of Communist party in the Slovak national uprising and bravery of Soviet Red Army and the Holocaust was to be wiped out from public memory during the communist regime in Czechoslovakia. Thus the memorials were created in small remaining Jewish communities at their premises and cemeteries within internal commemorative events. Trnava Holocaust memorial represents an exception from this trend. It is located in front of the synagogue and is easily visible from the street. Also its architectural concet is rare – the cenotaph is surrounded by three pillars (arcade) which are adopted from the free masonry symbology. The author was a member of Masonic lodge in Bratislava. The years 1942 – 1945 mark the period of the transports to nazi extermination camps from the fascist Slovak republic.

Szalatnai survived the Holocaust. In 1942 he got presidential exception from the deportations. He spent the last months of the war (after the Slovak national uprising when Slovakia was occupied by Nazis) in hiding. After the war he chnged his surname to Slovak version Slatinský. Artur Szalatnai-Slatinský is burried at the Neolog Jewish cemetery in Bratislava. He is one of the pioneers of modern Slovak architecture.

In the 1990s the memorial was completely renovated. The synagogue was used as a stock house. In 1978 it was listed as a  National cultural monument. In 1986 it was damaged by fire, but fragments of wall paintings and a upper balcony for women on cast iron pillars were saved. In 1994 the synagogue became part of the Gallery of Ján Koniarek in Trnava and serves as the Center of contemporary art. In 2015 the whole building underwent complete reconstruction financed by EU founds.

The Jewish community in Trnava has existed since the middle ages as an isolated community. In the 16th C already had a synagogue and a reeve. In 1539 the Jews were expelled from Trnava by the king Ferdinand I.  Forever „for perpetuity“ and the emperor  Leopold I. approved this regulation. The medieval Jewish ghetto vanished, but the perpetuation finished in 1783 by the Edict of the enlightened emperor Joseph II. The Patent of Toleration emancipated all religions and cancelled the restrictions for Jews related to the number of Jews living in the towns, economic activities, property ownership, access to education. The Jewish community in Trnava grew. Between 1891 – 1897 a new synagogue designed by Wienna architect Jakub Gertner Status quo ante was built: a building with two towers next to the Orthodox synagogue, a typical Jewish sacral architecture combining historic and oriental elements. Before the world war II the Jewish community in Trnava had over 3300 members who mostly perished in Holocaust. Nowadays only a few Jewish  families live here. The synagogues do not serve religious purpose but are reconstructed. 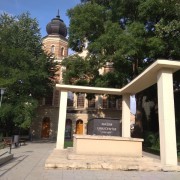