The Memorial of the Revolt of Peasants in eastern Slovakia

Rebels and the victims of the Peasant Revolt in 1831.

The Memorial of the Revolt of Peasants in eastern Slovakia in 1831 is near the village of Haniska on the Furča hill south of Prešov town.

The Memorial of the Revolt of Peasants in eastern Slovakia. National cultural heritage. The peasant revolt in Eastern Slovakia broke out on July 25th 1831 in the village of Kerestúr. It was unorganized revolt of 40.000 people in over 150 villages and small towns. It was the largest revolt against feudal burden and injustice in Hungary in the 19th Century and was brutally supressed after a month by the Hungarian army. 119 rebelles were hanged and 1000 imprisoned. The rebellion arose a wide reaction and speeded up the end of feudalism. The author of the memorial academic sculptor J.Pospíšil 1938-39. Slovenský ústav pamiatkovej starostlivosti

The central figure of the memorial is a victorious walking man on a high pylon. On the base there are seven rebells, symbolicaly depicting various estates – lower gentry, burgenses, miner, poverty, mayors, teachers and heyducks – state employees. The heiht of the memorial is 20m. The figures are 3.2m high, a bronze figure on the pylon is 4.2m high holding a branch in his hand. The sculptures are made of sandstone.

The memorial was built in 1938 within the 20th anniversary of the establishment of Czechoslovakia and as a commemoration of the Peasant Revolt from 1831. A weak harvest in 1830 worsened lives of the peasants and a year later cholera spreading from Galicia infected most of Eastern Slovakia. The epidemy fastened the outbreak of already prepared rebellion of villain’s in underdeveloped feudal monarchy where all social and economic relations were derived from the agricultural holding and halted any progress. Strict measures taken against the spread of disease such as restriction of free movement, ban on markets, forced medication and disinfection of wells were reinterpreted as effort of the nobility to poison the people. The rebellion led by reeves and a few yeomen was extremely brutal and so was its suppression. Out of 40000 rebels in 150 villages 119 were hanged and 1000 imprisoned, many (including women and children suffered body punishments). The serfdom was discussed at the Hungarian Diet between 1832 – 1836 and some but still only minor rights were attributed to the peasants. The memorial was suggested by the members of Young Slovak Jubilee Committee in Eastern Slovakia. The monument was created of sandstone by academic sculptor Jozef Pospíšil and architect Čeňek Vořech.

The rebellion was one of the largest resistance against feudal system and represents misery of the peasants and a lack of opportunities to improve the system. Nowadays it is a popular tourist spot.

explanation and description of the revolt:  korzar.sme.sk/c/4680959/vychodoslovenske-rolnicke-povstanie-v-roku-1831.html 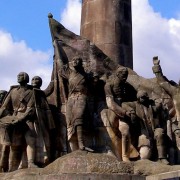 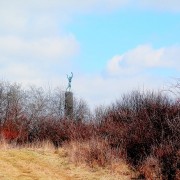 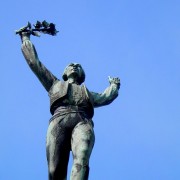 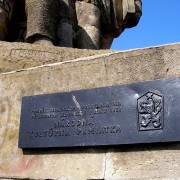 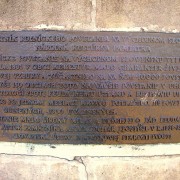 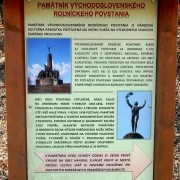